Last night I went to the Alameda County Jail at 7th & Jefferson to cheer-on the folks getting released after the bust of the 10th and Mandela foreclosed home occupation. Afterwards, part of the small crowd went to Oscar Grant Plaza as part of the ongoing vigil. During the night, a new tree-sit was started in one of the sycamores on the north edge of the plaza, this time a different tree than the one Running Wolf and others had been occupying earlier. Three people went up, with two ultimately staying the night there.

The crowd was small, a couple dozen at tops. An Oakland Police Dept. cruiser with two officers showed up, parked just east of the tree and watched. A small knot of people went up at one point and taunted the cops inside the vehicle, doing everything from hurling insults to pretending to arrest themselves on the hood of the car to coarse sexual theatrics.

The cops were largely unmoved and eventually left, I’m sure having seen it all before. Not to mention being way outnumbered. Two tents were set up below the tree and a couple people were lying down on a pad. The usual food and info table and vigil was happening off under the oak trees at the north end of the plaza. I left about 12:30am.

This morning I rode the 25 minutes to Oscar Grant Plaza from the Berkeley Marina for what I’d intended to be a short visit. When I got there, the tents were gone, having been confiscated by the police and there was only one person in the tree, “Agent Orange,” in his orange jumpsuit. He and another occupier had spent the night up on the makeshift pallet platform, partly enclosed by a “Free The Land” banner. “Crowded,” he replied when I asked him how it had been spending the night with two people on the small platform. 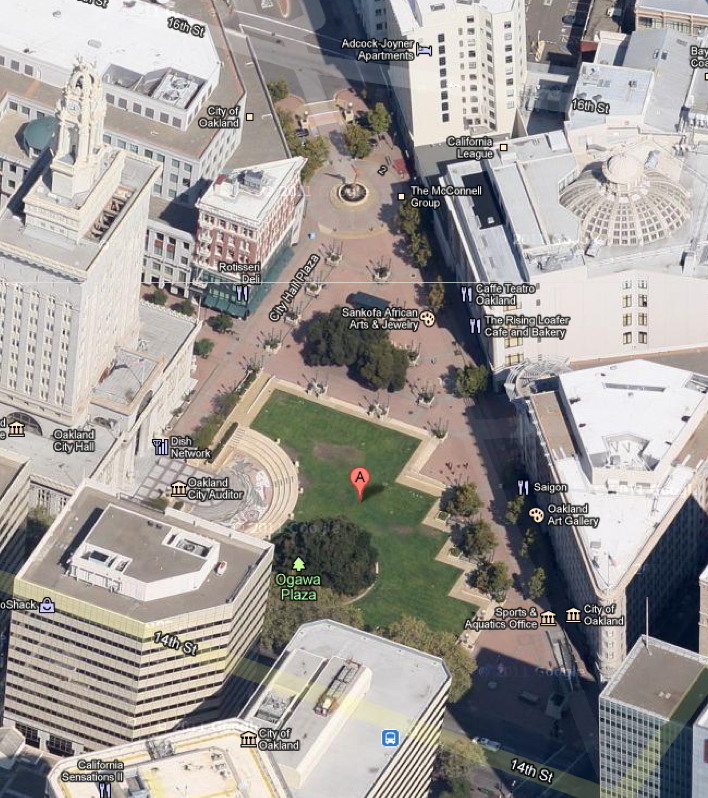 "Oscar Grant Plaza" (Frank Ogawa Plaza, officially). The vigil area is under the oak trees at the north end. The tree sit is hidden by buildings on the south end. Arrests took place in the area from the oak trees and fountain north one block to 16th St.

We chatted briefly, then he asked for coffee and a knife to cut rope with. I rode back to the vigil area, arranged for someone to bring him a knife, then went and bought him a coffee from a nearby shop, putting it in a bag he lowered then hoisted back up.

All seeming quiet—except for some of the people with mental health issues screaming at the cops—so I returned across the plaza to the vigil area. Shortly, there was a commotion by the tree and I cycled back in time to see the OPD arresting an activist and shoving him into the car. He was someone I recognized from last night, but don’t know by name. I was able to film the tail-end of the arrest, just as another arrest occurred.

I didn’t actually see what the second man had been doing prior to being grabbed. Having my bicycle with me kept made it difficult to maneuver right up front with my phone camera, but given the aggressive demeanor of the police, I’m guessing he was merely standing in the road or too near one of the cop cars. I asked later about the first arrestee and the story I got from one witness was that he was arrested for sitting against the tree. Seeing the aggressive and arbitrary police behavior later in the afternoon, this is entirely plausible and was a prelude to their actions at the north end of the plaza an hour later.

I returned to the vigil area around 1:30pm to find people packing up their personal belongings. The OPD had been giving contradictory information, but the last word was that everything had to be cleared out by 2pm, less than a half hour hence.

Back at the tree sit, people had begun to arrive in support, as news of the busts spread on social media networks. A huge “Operation Occupy” banner was hung up on the light posts, but removed within minutes by the police. They didn’t take it, but allowed protesters to hold it up.

Many of the usual bloggers, tweeters and livestreamers had arrived, including @BellaEiko. As she was reporting on her livestream, she asked for people to help cover the parking ticket she knew she’d get, since she forgot to put money in the meter in her rush to get to the action. After she gave me her car’s location, I cycled over and put a quarter in the meter, then went to find more change.

The nearest place was the sandwich shop on San Pablo and 16th, a couple hundred yards from the vigil. The shop wanted me to buy something before giving me four dollars change. Not having had lunch, I ordered a sandwich, got my change and went outside in time to see OPD cruisers arriving at about 2:12pm. I began a tweet, “2 OPD vehicles arriving north side of plaza, parking on 16th,” only to have to revise it to “4 vehicles”, then finally to “7 vehicles” before sending it. I grabbed my sandwich, cycled off several blocks to feed the meter and dashed back to the fountain at the north end of the plaza in time to see a couple men running full speed with cops hot pursuit and a crowd of protesters on their heels. the video below is a minute or two later, after two runners had been tackled.

Numerous arrests later, the crowd and cops were mixed up on 16th Street right near the now-locked doors of the sandwich shop. The scene was chaotic and, in my opinion pointless for both sides. People had been arrested for no good reason and the crowd was pissed and confrontational about it. The cops, for their part, were in complete disorder, an embarrassing display of unprofessional behavior. This was not the formation-marching lines of riot cops from previous major raids, but seemed more like a rogue spite attack.

While I shared the crowd’s anger and disgust at what seemed like gratuitous police harassment, I also didn’t see any point in further confrontation, especially after the point when the cops were leaving. As it played out, it only led to additional arrests. There is a time to confront, but only when you are in a position of strength and doing so furthers your strategic goals. Once the melee in the street broke out, that time had passed.

My first impression was that the cops didn’t seem to have any plan or purpose, grabbing people seemingly at random. I was doing a mix of video and livestreaming during this time, trying to maneuver my bicycle in the ruckus while still getting close enough to film what was happening without getting arrested. With so much going on, I didn’t realize that they were actually targeting certain people. Since I’ve mostly been here for the larger actions and marches and some of the General Assemblies, but not so much the day to day operations, I don’t recognize many of the core Occupy Oakland activists by face, but these were some of the ones targeted. Other eyewitness reports will come out by those who can give more specifics and I’ll link to them here as I find them.

If I can offer one tactical observation here, it is that when people are either being targeted or arrested at random, the herding or schooling response should come into play. Instead of being intermingled with police officers and vehicles and bystanders on a narrow street, engaging in confrontation, the effective thing for cool heads would be to posse-up behind the cops in a tighter clump, with the safety of the plaza and side streets as escape routes behind. This would allow the cops to leave if they wanted to (and we wanted them to, yes?), give us room to maneuver if they assaulted us again and make it harder for random people to be pulled out of the disorganized crowd.

The day’s final arrest occurred when someone allegedly kicked an unmarked police vehicle as it was leaving the intersection of 16th Street and Clay. (See end of video above.) The cops grabbed a woman who, according to numerous eyewitnesses screaming at the cops, was not the one who did it. They didn’t care that they’d got the wrong person. In that situation weren’t about to let anyone go. A call went up to regroup at the plaza and the crowd, somewhat spent, trickled back.

The irony of all this is that the tables and signs and other vigil materials were all still there—minus the “Occupy Oakland” banner that the cops had taken. The supposed purpose of the raid had not been fulfilled. The first arrest, according to an eyewitness was a woman holding her sleeping bag roll, which is technically illegal now in Oscar Grant Plaza. (There are no tents, but vigilers had been sleeping there in the open.) The officer ordered her to drop it, she wouldn’t and was arrested. Other arrests I saw were similarly arbitrary and unjust. The video below is by regular Occupy Oakland Tweep @Geekeasy and shows the first arrests in the plaza.

While the police began with a seemingly calm tone, once one person ran away, they broke ranks and began their more random, chaotic behavior. They lost control of the situation rapidly, but still managed to arrest a dozen people.

I tweeted that the cops approaching the plaza were not in riot gear. This at least showed that tear gas or rubber-coated bullets would be unlikely to be used. I think there is also something we can learn about the nature of this assault on Occupy Oakland. When riot gear is used, it seems to come with a much higher level of organization and planning. They have clear intentions as well, such as clearing out camp or keeping people from reoccupying. Based on the woman’s statement in the above video and the cops’ subsequent disorganized behavior, I can’t help but wonder about the level at which this action was organized and what its intention really was. My guess it that they were given orders to arrest known people, along with anyone who seemed like an easy target and to create maximum disruption. If I had to put money on it, I’d say that it was tactically organized ad hoc at a low level in the organization as part of a larger strategy of attrition that has been approved at much higher levels.

Another secondary purpose of the arrests, beyond simple disruption, might be to create a database of activists, though I was told that many of today’s arrestees had been arrested previously. Arrests also take people out of commission for a day or a week or occasionally more, drain support energy, demoralize potential supporters and put people on probation or pretrial release agreements that keep them from taking any legal risks. On the other hand, excessive force by police, especially in Oakland, has continually generated more public support at times when Occupy energy was waning. Whether today’s action builds support for the Oscar Grant march from OGP to Fruitvale BART station on Sunday remains to be seen.